“Some men are born without sense or imagination. They don't know enough to be afraid. But the man who tramples down a great fear wins his courage by earning it."


William MacLeod Raine was mighty prolific producing 81 novels in a career spanning from 1908-1954.


Often when we see such high turn-out there are worries that we are seeing hackwork or formulary work at best, but Raine falls into neither category.


Yes, he was a prolific writer but he was also careful, he brought his own early day’s experience of working on a ranch to bear on his novels and short-stories providing some patina of authenticity.


This novel from 1918 does show some age. It is melodramatic, given to coincidence, and the overall arc feels familiar—I won’t give that away here—I hate spoilers.


But despite these faults, there is a poetic eye for the land that smacks of real observation and, as displayed in the opening quote, there is a running theme of courage and responsibility that struck this reader not as preachy but as a sincere point of view. The following extracts show that Raine has given much thought to this theme of riding herd on your fears and doing what needs to be done despite them.


“What shook his nerve was the fear of anticipation, the dread of an impending disaster which his imagination magnified.”


“"The trouble with the boy is that he has too much imagination. He makes his own private little hell beforehand."


The things that scare a man are those that are mysteries to him. Any kid will fight his own brother because he knows all about him, but he's plumb shy about tackling a strange boy.”


"My friend, that is the only kind of courage really worth having. That kind you earn. It is yours because it is born of the spirit. You have fought for it against the weakness of the flesh and the timidity of your own soul.”


These observations strike me not as moralizing, but as sincere perspective from someone who has had to learn the lessons himself. He passes those lessons along to the protagonist, and thus to the reader.


I reckon we could all use a bit of mentoring, young or old. 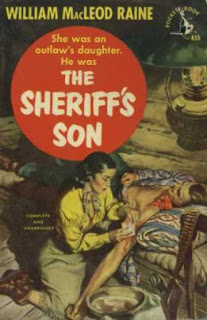