A Conversation with Steve Myall

Today's interview is a change of pace. A rookie western reviewer -yours truly, has a conversation with the Big Dog on the block, Steve Myall of Western Fiction Review.  In short, if you've got time for only one review blog on your daily surf of all things cyber, Steve's is the one to go to.

What is it about the western genre, one that is admittedly niche now, that attracts you and keeps you coming back to it?


When my mother was pregnant with me she went to the cinema to watch a western. Part way through she had to leave for I had decided it was time to emerge into the world. She has always said that she’s convinced I could hear the western and that became part of my being when I was born. She could well be right as I cannot remember a time that I haven’t enjoyed westerns. The stunning scenery, the sound and sight of galloping horses, the clash of cultures, bad verses good, the different plotlines and the action just keep me coming back for more.


As I mainly read books that are part of series then the need to see what the main character(s) will face next, especially if the stories have strong continuation from book to book, ensure I’m going to read the following one.

Being asked to read westerns by publishers or authors for reviews keep me reading the genre too.

Have you found that your loves or tastes in the genre altered once your started penning reviews? That is, did having to articulate what you liked wind up changing how you saw the works in front of you?


My tastes haven’t changed since I started penning reviews. I think that would be down to age. When I grew up I wanted action, the more graphic the violence the better and let’s face it the western series being written in the UK at that time came from the Piccadilly Cowboys and they fulfilled my need superbly. I tried a couple of American series and didn’t really take to them, but later in life I started to appreciate them more and now I happily read all kinds.

Writing reviews has never altered how I reflect on the story I just read.


There is so much gold in the genre, obviously we both feel this way, or we wouldn’t be so passionate as to go on and on about it, but…there is also some admittedly bad writing within the genre. How often do you come across work that is so bad, or at least, so not to your tastes that you can’t get beyond the first page?


The explosion of ebook authors seems to have made it easy for poor writing to be published, sometimes this is down to the fact that many of these writers don’t seem to have anyone proof read and check for grammar. This has been particularly noticeable if English isn’t the authors’ first language. The beauty of ebooks is you can usually read a bit on line and make your mind up about them before buying.

I get a lot of books from one publisher and their publications feature work from a vast variety of authors and there are some whose writing just doesn’t click with me. These I rarely read but I will add finding an author like this doesn’t happen that often these days.


Are there acknowledged classics or authors in the field that leave you scratching your head, wondering, “I don’t get the appeal”?


Yes. Lots. But I believe this is down to the time they were written. Some of the old pulps for instance I struggle with due to the old time lingo and beliefs. There are a couple of today’s writers that I don’t read much of due to their style just doesn’t gel with me. Of course this doesn’t mean they are bad writers as many people do like them, it’s just down to personable taste.


Have you found that any of your favorites pre-blog altered in your eyes once you started the blog? If so, which works/authors and how did it change for you?


I can’t recall any, simply because I rarely re-read a book a read before I began writing reviews. There are too many that I haven’t read yet to have to be re-visiting previously read works. On the odd occasion I have done this it’s been because a publisher has republished one of those books I read a long time ago, but I’ve yet to discover one that my level of enjoyment of has changed. 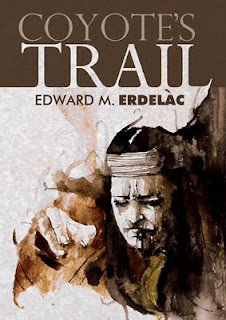 That’s very difficult without knowing their taste. For instance if they mainly read romance then I’m sure I could find a western that fits the bill for that kind of storyline. There are westerns that flirt with horror themes, those that deal with mythology and others that apart from being set in the old west could be crime/mystery novels so it would be easy to hand them something that would merge with their tastes and then (hopefully) see them want to explore the western genre more fully.

I find most people who say they don’t like western fiction have never read any when you ask them why so the first challenge is to get them to try one.


To your experienced eye, who are some over-looked authors, or unacknowledged books that you feel should be more widely known in the genre?

This is a difficult question as again it all comes down to taste. What I might suggest may not be something others will like. As you’ve asked I will throw a few names into the mix. Edward M. Erdelac, Lee Clinton, Tell Cotten, Elisabeth Grace Foley, Jere D. James and Bruce H. Thorstad. Just a few that immediately came to mind.


Are there any other fiction genres that turn your crank? If so, what are they and do you have favorites to point us towards?


I don’t really have time to read anything but westerns. I will sometimes read other genres if written by some of my favourite authors but don’t do this as anywhere near as often as I’d like. When I do pick something from a different genre it would usually be a crime novel. When I was a teenager I used to devour James Hadley Chase books, so this may have something to do with my choice.
at December 18, 2017