Geronimo: The True Story of America's Most Ferocious Warrior 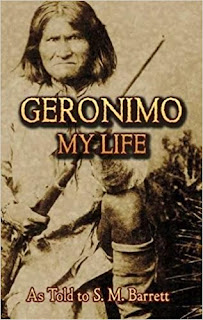 “Preparation of a Warrior To be admitted as a warrior a youth must have gone with the warriors of his tribe four separate times on the warpath. On the first trip he will be given only very inferior food. With this he must be contented without murmuring. On none of the four trips is he allowed to select his food as the warriors do, but must eat such food as he is permitted to have. On each of these expeditions he acts as servant, cares for the horses, cooks the food, and does whatever duties he should do without being told. He knows what things are to be done, and without waiting to be told is to do them. He is not allowed to speak to any warrior except in answer to questions or when told to speak. During these four wars he is expected to learn the sacred names of everything used in war, for after the tribe enters upon the warpath no common names are used in referring to anything appertaining to war in any way. War is a solemn religious matter. If, after four expeditions, all the warriors are satisfied that the youth has been industrious, has not spoken out of order, has been discreet in all things, has shown courage in battle, has borne all hardships uncomplainingly, and has exhibited no color of cowardice, or weakness of any kind, he may by vote of the council be admitted as a warrior; but if any warrior objects to him upon any account he will be subjected to further tests, and if he meets these courageously, his name may again be proposed. When he has proven beyond question that he can bear hardships without complaint, and that he is a stranger to fear, he is admitted to the council of the warriors in the lowest rank. After this there is no formal test for promotions, but by common consent he assumes a station on the battlefield, and if that position is maintained with honor, he is allowed to keep it, and may be asked, or may volunteer, to take a higher station, but no warrior would presume to take a higher station unless he had assurance from the leaders of the tribe that his conduct in the first position was worthy of commendation. From this point upward the only election by the council in formal assembly is the election of the chief. Old men are not allowed to lead in battle, but their advice is always respected. Old age means loss of physical power and is fatal to active leadership.”


This as-told-to biography of the legendary Apache warrior by S. M. Barrett is a plain-spoken straight-forward matter-of-fact account of things as Geronimo saw them.


What is here, is a fascinating glimpse inside the mind a man who confounded many on both sides of the border. This glimpse is illuminating, but one also gets the feel that the canny old warrior is till holding back, watching, waiting for opportunity.