Hick Flicks: The Rise and Fall of Redneck Cinema 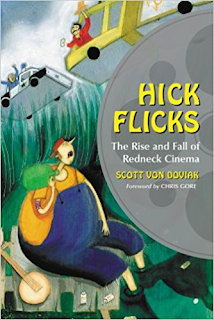 “What a man did on his own land was his business…. They fought for this country. They did it to guarantee the basic rights of free men. They just figured that whiskey-making was one of them.”-From the film Thunder Road.


Scott Von Doviak has done a mighty big favor for any of us who have a soft-spot in our hearts for Gator McKlusky, Jerry Reed, Buford Pusser, or the wild-ass ride that was Peter Fonda and Warren Oates trying to outrun devil worshippers in an RV in the film Race With the Devil.


Von Doviak knows these films are not art [well, in some cases they are, such as Deliverance] but he does not condescend to the genre either. He has viewed them as a serious reviewer might and should and finds their relative merits within what they are trying to be, which is usually just car-crashing cheap entertainment.


A fine volume that has led me to more than a few fun viewings in a genre full of the less than great.


Hick flicks, or hixploitation films, or some call it redneck cinema strikes me as a contemporary off-shoot of the Western. This exchange from the Western film master Sam Peckinpah’s Convoy conveys that connection.