The Soul of the Indian 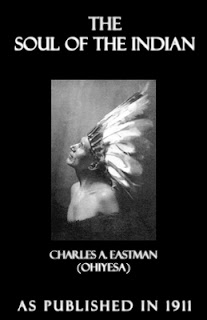 “As a child, I understood how to give; I have forgotten that grace since I became civilized. I lived the natural life, whereas now I live the artificial. Any pretty pebble was valuable to me then; every growing tree an object of reverence. Now I worship with the white man before a painted landscape whose value is estimated in dollars!”

The Soul of the Indian is Charles Eastman's brief volume explaining the inner-life of the American Indian as he saw it.

Ohiye S'a [his Santee Dakota name] spent time in the white government school-system, returned to his people as a physician, and he is able to apply this twin viewpoint to his evaluation of the two cultures.

Deeply personal and a lovely, if idealized, vision of the Native side of things. Fans of Thoreau's Walden will find much to admire here.