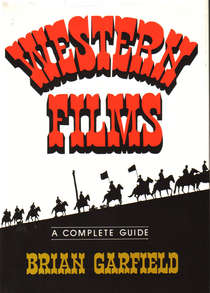 [From the “Tribute” to Frederick D. Glidden, aka Luke Short.]


“He was a man to whom good and evil were absolutes but men and women were not.”


Western author Brian Garfield [and a fine one at that] offers this idiosyncratic guide to Western flicks. He opens with a few essays that detail the treasures of the genre as well as its shortcomings.


Garfield does not play his opinions close to the vest. If he likes something, he’ll say it [the easy task], but if he doesn’t, there are no qualms here either---for example, his blanket dismissal of the Spaghetti Western genre as puerile, unpleasant and shoddy.


Whether one agrees with the opinions within the volume or not, they are not easily dismissed as this is a man who takes the genre seriously as a writer, historian, screenwriter, and as someone who had his own brushes with the picture business this moves beyond mere fan work or academic criticism.


I found it as much fun to read and browse as to agree and disagree regarding certain films.
at December 01, 2017