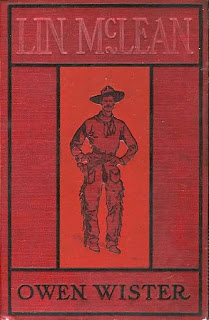 “In the old days, the happy days, when Wyoming was a Territory with a future instead of a State with a past, and the unfenced cattle grazed upon her ranges by prosperous thousands, young Lin McLean awaked early one morning in cow camp, and lay staring out of his blankets upon the world. He would be twenty-two this week. He was the youngest cow-puncher in camp. But because he could break wild horses, he was earning more dollars a month than any man there, except one. The cook was a more indispensable person. None save the cook was up, so far, this morning. Lin's brother punchers slept about him on the ground, some motionless, some shifting their prone heads to burrow deeper from the increasing day. The busy work of spring was over, that of the fall, or beef round-up, not yet come. It was mid-July, a lull for these hard-riding bachelors of the saddle, and many unspent dollars stood to Mr. McLean's credit on the ranch books.”


This short story by one of the pioneers of the genre, Owen Wister, is an amiable ramble as we follow the affable Lin McLean through his many side-trips and byways to make it “back home.”


There is a lesson about going home in McLean’s destinations that we might ought to ponder in our own lives. But, again, along the way Wister provides us with many smaller incidences rife with life lived. In the hands of this skillful pioneer character can be summed in a word and the dance of young men and women meeting can be encompassed in a brief passage.


“Mr. McLean's hours were already various and successful. Even at the wolf-dance, before he had wearied of its monotonous drumming and pageant, his roving eye had rested upon a girl whose eyes he caught resting upon him. A look, an approach, a word, and each was soon content with the other.”