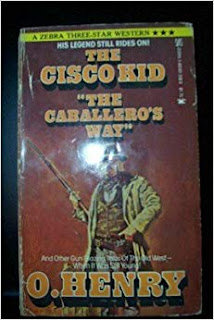 “The Cisco Kid had killed six men in more or less fair scrimmages, had murdered twice as many (mostly Mexicans), and winged a larger number whom he modestly forbore to count. Therefore, a woman loved him.


The Kid was twenty-five, looked twenty; and a careful insurance company would have estimated the probable time of his demise at, say, twenty-six.”


O. Henry created the Cisco Kid which in no way bears any resemblance to the amiable hero of the film and television series. O. Henry’s Cisco Kid is a cold-blooded killer. Affable, charming, but a killer through and through.


The story’s twist-in-the tale [a veritable O. Henry ending] is telegraphed a bit, but the descriptive and narrative language make this one a more than pleasing read.