The Bride Comes to Yellow Sky 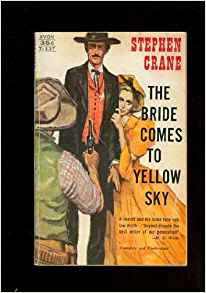 “A newly married pair had boarded the coach at San Antonio. The man’s face was reddened by many days in the winds and sun, and a direct result of his new black clothes was that his brick-coloured hands were constantly performing in a most conscious fashion. From time to time he looked down respectfully at his attire. He sat with a hand on each knee, like a man waiting in a barber’s shop. The glances he devoted to other passengers were furtive and shy.”


Another of Stephen Crane’s beautifully observed Western tales. A newspaper sent the journalist on a tour of the West and Mexico and Crane went with eyes wide open and talent blazing white hot.


In this tale, the newlyweds are observed in heartbreaking and heartwarming detail. These observations are coupled with a look at their train’s destination where there is a spot of trouble waiting for their arrival. Both sides of the story are beautifully portrayed.


One wishes the short-lived Crane had more left in his artistic wake, but what is there is evidence of enormous talent.
at November 14, 2018