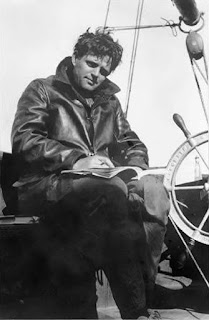 “He was squatting in the moss, a bone in his mouth, sucking at the shreds of life that still dyed it faintly pink.  The sweet meaty taste, thin and elusive almost as a memory, maddened him.  He closed his jaws on the bones and crunched.  Sometimes it was the bone that broke, sometimes his teeth.  Then he crushed the bones between rocks, pounded them to a pulp, and swallowed them.  He pounded his fingers, too, in his haste, and yet found a moment in which to feel surprise at the fact that his fingers did not hurt much when caught under the descending rock.”


That bit of informed descriptive genius is from Jack London’s story of survival in the Yukon “Love of Life.” London, an adventurous sort and no mere poseur or pretender to life, knew hunger and suffering and struggle in his early days and he brings that vivid in-the-midst experience to stark life in this, rightly, high-regarded tale.


One is slapped in the face in each paragraph with the realties of gnawing hunger, tearful fatigue, and the fragility of propriety in the face of want.


Anyone who has ever been through a bit of a tough time in a grueling outdoor environment will recognize that much truth is to be found here. It may be alien to some who have not stepped outside the confines of comfort, but this story drips with bleary-eyed authenticity.


An absolute classic of what it “feels” like to exist where survival is not so much a choice as a directive from the soul.
at November 12, 2018