Only the Dead Ride Proudly 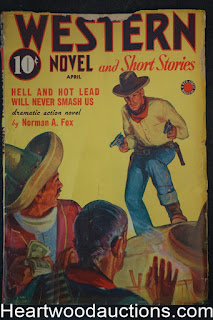 Captain Marsh had picked his deckhands carefully, too, thirty of them, knowing it would likely be a hard summer. Stuart had been one of them, fair-haired and blue-eyed and young-old, a military straightness to his spine and a bitter hunger naked in his face, a man who spoke a language that was not a roustabout’s, but whose eyes were squinted from looking across great distances.


Norman Fox packs a lot of wallop in this tale of a steamer transporting Custer and his troops to the apocalyptic battle. We are shifted forward and back in time and gain depth from backstory, stark relief from present battle preparation and letters to loved ones back home, and poignancy for we know what is to come at the disembarkment of this historical journey.


It is all handled with an ace hand and a knowing respect for the dead.
at November 29, 2018